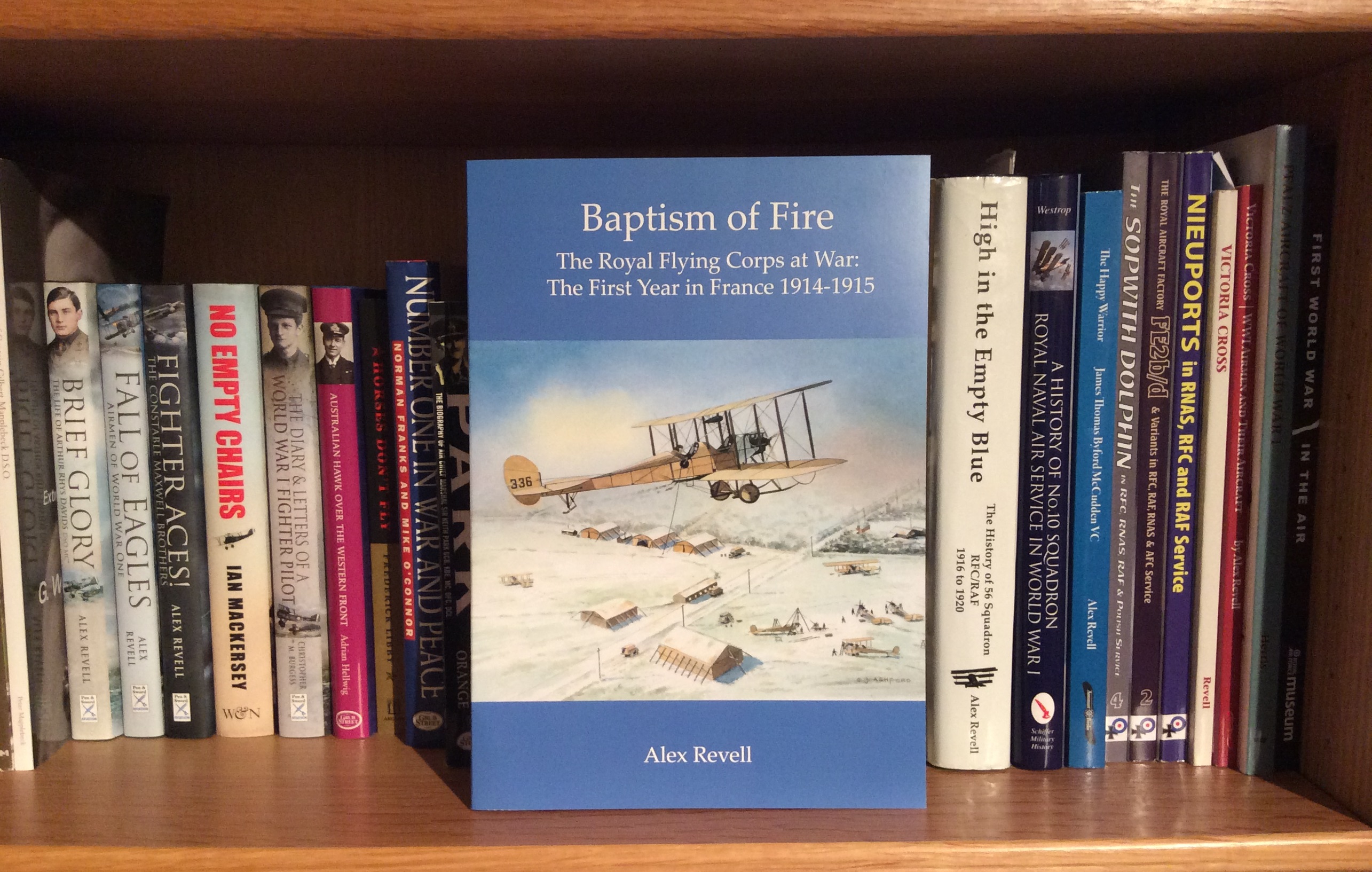 The Launch Publication of Wickford Books

Baptism of Fire: The Royal Flying Corps at War:

Baptism of Fire details the vitally important role played by the Royal Flying Corps in the first year of the war of 1914-1918: its pioneering of aerial reconnaissance, both visual and photographic; the essential, all important work of ranging for the artillery, and its ultimate development into a highly effective and important arm of the British Army.

It is also the personal story of the courage of young airmen whose underpowered machines lacked the ability to climb to a height sufficient to protect them from both anti-aircraft fire and small arms fire from the ground. Young men, who daily – weather permitting – in infantry terms, went ‘over the top’ every day to face the fire and shock of the enemy.

Baptism of Fire has 159 pages, with fourteen chapters, ranging from pre-war days, to the arrival of the Fokker monoplanes. There are 160 illustrations: for good size, and informative captions, these are presented on individual pages following each of the relevant chapters. (not in the usual photographic sections.) There are six maps.

There are three appendices.

Appendix  I: The departure of the RFC to France in August 1914: a listing of the men and aeroplanes, types and serial numbers that flew to France on 13 August 1914 plus those men and machines that went by sea.

Appendix II:  The aeroplanes, by type and serial numbers, used by the RFC in 1914-1915, including those purchased from the French.

There are extensive chapter notes; selected biographies of prominent people; a bibliography, and an index.

Please take a look below to view an extract of Baptism of Fire. Press the

below to make see the reader in full screen.

Alex Revell has been interested in World War One aviation since the age of six, when he began reading the famous John Hamilton series of aviation classics. Other interests intervened in his teens, but he began serious research in the 1960s. Primarily interested in people and their role in the air war of 1914-1918, he traced and interviewed a great many ex-members of the RFC, RAF and RNAS and is proud that many of them became personal friends

An internationally acknowledged researcher of WW1 aviation, Alex Revell has contributed many articles to specialist aviation magazines and is a founder member of Cross and Cockade International, the First World War Aviation Historical Society.

A retired engineer, and also a jazz musician of international repute, Alex lives in Cornwall, with his wife Linda and three Burmese cats.

Some first reviews of Baptism of Fire.

Alex Revell has spent a lifetime researching the men of the Royal Flying Corps. Baptism of Fire examines the first year of the war. The copious illustrations are fascinating with the captions revealing the erudition of the author. The individual portraits of the pilots are a joy! Altogether a wonderful book essential to any Great War air library. Peter Hart. Great War Book Review.

This is a top piece of research which will soon become an essential part of the library of anyone who wants the facts about the birth of the air war. Around 180 remarkable photos stand alongside such a detailed and highly considered text. First rate.  Buy it! Spread the word! Trevor Henshaw. Great War Book Review.

A fresh and comprehensive overview of the role and the development of the Royal Flying Corps from 1912 to August 1915. Highly recommended.  David Filsell. Review editor of the journal of the Western Front Association.  Stand To!

Victoria Cross, World War One Airmen and Their Aircraft

The Happy Warrior. The biography of James McCudden VC.

A memorable account of the part played by two brothers in two wars…an insight into the determination, skill and courage. Common to the airmen in both wars: Highly recommended for all air historians.  Cross & Cockade International.

A sensitive and deeply moving biography I cannot recommend this book more highly. A must for everyone who is interested in WW1 Aviation: Not to be missed as a fascinating account of life and death in WW1. Cross & Cockade International.

This is the Squadron history to end all squadron histories. He could well have written the best specialised study in the field of World War One aviation literature. I suspect this will be the best book I ever get to review.  Cross & Cockade International

a straightforward and very complete account of the work of Britain’s first fighter squadrons and the brave men who participated in the first air war. The research and compilation is appreciated but perhaps most enjoyable is the skill with language made plain on every page. A magnificent achievement and a volume to treasure. Aeroplane: Book of the Month…

This book is an excellent account of the activities of pilots and the actions they engaged in during WW1. Very well written and researched – a must for anyone interested in aerial combat. Amazon.

This is a book that I recommend to anyone interested in Great War aviation. As the distillation of a lifetime of dedicated research it is of unbeatable value.  Noted historian and author Peter Hart. Great War Book Review. Highly impressive only starts to describe The Happy Warrior. It is a must for anyone claiming a genuine interest in the Great War in the air and a template for other writers.  Stand To! Journal of the Western Front Association. David Filsell.

Scroll back to top